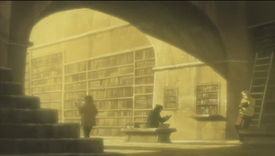 The Command Center of the Scub Coral was a location in Eureka Seven.

It is revealed that the Command Center not only serves as a holder for all the information regarding the Scubs, Coralians, and their experiences with the humans, but to keep the Scub Coral in its dormant state. In episode 47, Diane reveals to Renton that if the Command Center is destroyed, all of the Scub Coral will wake up and trigger the Limit of Questions, which will engulf the entire planet into a large black hole. The only way to prevent this is for all the remaining lifeforms on the planet to merge with the Command Center, that way their mental states will remain alive.

The Command Center was destroyed after Dewey Novak fired upon it with Oratorio Number 8, which was helped by theEND launching a homing beacon onto it. Shortly afterwards, Renton, Eureka, their adopted children and the Nirvash typeZERO decided to become the replacement Command Center in order to prevent the Limit of Questions from being activated. This was foiled once Dewey killed himself after being attacked by Holland. Due to the Compac Drive embedded in his chest, the collars both Eureka and Anemone wore began emanating electrical sparks, causing pain to both. The purpose of these collars were to destroy the Scub Coral if either of them became the replacement Command Center, which in turn would kill the world. Anemone was able to remove the collar, but, Eureka, realizing something was wrong, decided to become the Command Center herself in order to save Renton, the kids, and the planet. However, due to her desire to see Renton and the children again, she started rejecting becoming the replacement Command Center. She was saved from this burden once Renton, along with the Nirvash typeZERO spec 3, came and rescued her. The Nirvash took her place and ejected the two from the Command Center. It then departed along with half of the Scub to another universe until both the Scubs and humans could find a way to coexist in peace.

The Command Center is not mentioned in Eureka Seven: AO.

Retrieved from "https://eurekaseven.fandom.com/wiki/Command_Center_of_the_Scub_Coral?oldid=13998"
Community content is available under CC-BY-SA unless otherwise noted.