Elena Peoples (エレナ・ピ－プルズ, Erena Pīporuzu) is a character in Eureka Seven: AO. She is an IFO pilot of Team Pied Piper of Generation Bleu. She pilots the RA301 Kyrie. Her birth name is Ellen Brooks.

She has dark skin and short pink hair. Her uniform has neon pink highlights. She is a reserved girl who is hard to read. She is an avid netizen and enjoys checking up on her favorite websites to see if they are updated, even in the field. She is an avid anime watcher as well, she mentions she believes in the unbelievable because the unbelievable happened to occur to her when Eureka saved her life.

Little is originally known about Elena's past or her history before joining Generation Bleu. Elena was born in America in an area of high trapar concentration, and like other IFO pilots, it is believed that her ability to pilot IFO's is a result of a brain alteration caused by the trapar. Before Elena was taken to Generation Bleu by President Blanc, she was kept in a research facility in America who specialized in experimenting on potential IFO pilots such as herself. It is heavily implied later in Episode 11 that the Elena at Generation Bleu is in fact an impostor of the original Elena Peoples, who died on a cruise during a Scub Burst.

In Episode 11, she is shown to be masquerading as Miller, a singer at Generation Bleu, and her thoughts

surrounding Miller, such as her appearing in several hallucinations where Elena questions her own identity, implies that Miller is a split personality of some sort. Despite a 97% match in appearance, as well as the two never being seen in the same place, a fact noted by Pippo, Elena and Miller are shown to have different DNA, further mystifying the relationship between the two. Also in the episode, she had a vision of being carried through the sky by Eureka and sees the Nirvash typeZERO, including the world of the original Eureka Seven, many centuries later. During episode 19, she revealed that she was from Eureka's world, brought by Eureka. However, In episode 21, her past is confirmed: it was Eureka who saved her during the Scub Burst in 1981, near the Caribbean Sea and was teleported to 2020. She was never from the distant future. Her real name is Ellen Brooks.

On the Final OVA entitled: One More Time, Ao arrived in 1981 due to the Quartz's time properties. Knowing that important time, Ao uses it to his advantage, telling Ellen about the real Elena that needed to be saved in the future, despite being taken as a projection due to the state he was in. This allows the current Elena to swim to the shore on her own before the Scub Burst. She eventually grows up and became part of Generation Bleu, working with Christophe on their plan to save Ao. She saves the real Elena Peoples from the same sea incident, telling her that she will be the one to save Ao. The real Elena became an IFO Pilot under Generation Bleu and was part of "Operation Astral Ocean" to save Ao. After she and Fleur saved Ao from constant time-leaping, the real Elena has her first meeting with Ao.

Elena Peoples in her first appearance 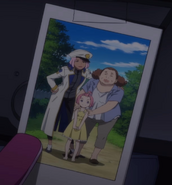 Elena (AO) as she appears in One More Time.
Add a photo to this gallery

Retrieved from "https://eurekaseven.fandom.com/wiki/Elena_Peoples?oldid=14623"
Community content is available under CC-BY-SA unless otherwise noted.