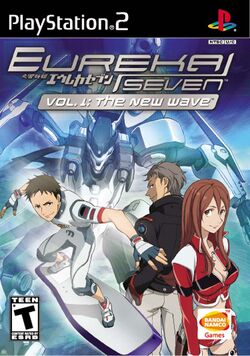 The main character is Sumner Sturgeon, who is the son of the renowned Bernard Sturgeon. Sumner starts out at a military training academy, dubbed New Wave (or NW). That is where he meets his love interest, a girl by the name of Ruri. Sumner’s teammate, Hooky Zueff, immediately gets jealous and challenges him for Ruri's heart in the championships of New Wave academy. At the championships, Sumner finds out that Ruri is leaving New Wave. She says that he wouldn't understand it until he owned his own LFO and leaves him with a kiss and a picture. Sumner wins the championships regardless, only to be recruited by the illustrious Sawyer Team, the military branch that New Wave has been training him for. From there on out he pilots his KLF on various missions that test how well he knows his LFO, such as taking out a bandit group situated in mines, getting hard evidence against a black market trade, and protecting his city from various disruptions. Later on, Sumner’s old teammates join Sawyer Team. There are then six people on Sawyer Team, and Hooky still dislikes Sumner.

Near the end of the game, Ruri is tasked with bringing the Nirvash TypeZERO to Holland. Sumner pilots the TypeZERO in order to protect Ruri, and to bring it to Holland and Eureka. Sumner uses it to defeat the other members of Sawyer Team, along with defeating Captain Saville.

After a series of missions, Sumner eventually meets up with characters from the anime, including Holland, Moondoggie, and Eureka. The game's final missions find him piloting the Nirvash in an attempt to protect Ruri and bring it to Holland.

Retrieved from "https://eurekaseven.fandom.com/wiki/Eureka_Seven_vol.1:_The_New_Wave?oldid=11504"
Community content is available under CC-BY-SA unless otherwise noted.