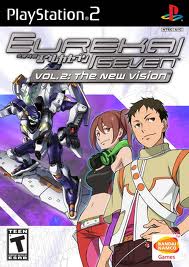 Eureka Seven vol.2: The New Vision is the second game based on the Eureka Seven series. It is a direct sequel of Eureka Seven vol.1: The New Wave, developed by Bandai for the PlayStation 2. The game was released in Japan on May 11, 2006, and in North America on April 17, 2007.

This game, once again puts its focus on Sumner Sturgeon, who left the military at the end of New Wave, was marked as killed in action by the military. It takes place a few years after New Wave. Sumner has become a pro-lifter of sorts, lifting under different aliases to prevent anyone from realizing who he is. Sumner later partners up with Ruri, and Moondoggie, who left the Gekko due to abuse from the crew, to investigate a military development called CFS, otherwise known as the Compac Feedback System, which allows anybody to pilot an LFO like a pro, albiet with many drawbacks.

The game takes place right before the start of the anime series as the very final scene of the game is of Dominic above Bellforest, which leads into episode 1, Blue Monday, of Eureka Seven.

Retrieved from "https://eurekaseven.fandom.com/wiki/Eureka_Seven_vol.2:_The_New_Vision?oldid=11569"
Community content is available under CC-BY-SA unless otherwise noted.