Fleur Blanc (フレア・ブラン, Furea Buran) is a character in Eureka Seven: AO. She is an IFO pilot of Alleluia as a member of Team Pied Piper of Generation Bleu.

Fleur is a French girl who has pale skin and long blonde hair. Her uniform has blue highlights. She is aware of her prowess as a pilot and is prideful and headstrong.

She has a blog that she updates regardless of the situation around her. Elena and herself are held as some form of idols by people, as they are of an exclusive group of children who pilot IFOs. She was also part of a TV series with Elena up until it was canceled during the incident with the formation of the Quartz Cannon.

It is revealed that she is actually the daughter of Generation Bleu's president, Christophe Blanc, who she shares an estranged relationship with due to the death of her mother.

After her father dies during the Allied Forces and Truth's attack on the Generation Bleu headquarters, she takes over as the current CEO which was negotiated by her father with Japan and the Secrets prior to his death.

Initially, Fleur saw Ao as a foolish and reckless IFO pilot, frequently critiquing him for any mistakes he made while on missions. She directly told Ao that Nirvash is what the President after and not him. She also not convince for every action Ao made. She starts to change her attitude towards Ao after the mission in Faisal Arabia, where they collaborated to help save the people there.

On Episode 8 during the mission there, Ao disappoint on Ivica's Decision to follow the order of the Generation Blue's President to cancel there mission, He left and run on outskirts of Faisal Arabia soon Fleur chase him. Finding some mutual anger for her father she reveal the reason why she hates her father, Generation Bleu's President Christophe Blanc. Ivica found them and said that there mission resume. As they fighting the Secret, Fleur told Ao that she will destroy the Secret no matter what happens to her but Ao insisted that his not okay on it which Fleur blushed and Both of them destroy the Secret. As the operation succeed Fleur become good to Ao and they became friends after the mission.

On Episode 9 Fleur and Elena Saves Ao from drowning after he destroy the Secret which Elena teased her which Fleur said before that she will not save Ao if he got drown.

On Episode 11 After encountering the Unknown Secret. She is frequently seen giving Ao friendly teasing about Naru and Elena tease Fleur that she has someone she likes too which everyone overheard to the point Fleur annoyed.

Initially as the story progress Fleur show some concerns to Ao especially when Ao and Eureka met. Later in Episode 19 the Generation Bleu was attacked by Truth which his father Christophe Blanc save them and entrust her daughter to Ao that he will take care of her then he go inside of the lab and force to lock to activate the Fusion Blast which he sacrifice himself and killed Truth.

Fleur got mixed feeling towards to Ao. On Episode 24 she was seen chasing Ao begging to stop going to his family which Ao had direct conversation to her saying that he will end everything and save his mother. As Ao wants to say something to Fleur the connection got lost indicates Ao was inside of Pillar of Light. Fleur cries and her IFO began booting for Third Engine. Her fate is unknown if she catch up to Ao. It indicates Fleur has love interest to Ao.

On the Final OVA entitled: One More Time it reveals that history had been altered especially Fleur's father, Christophe Blanc is alive and tell her the day she met Ao (Time Leaping) when she was a kid, She remember it and Rebeceka show some Footages where Ao is always present on the scene indicating that they will save Ao. She took part in "Operation Astral Ocean" together with the real Elena Peoples, the latter as a teenager and currently an IFO Pilot to save Ao. In the difficult operation, she and Elena shoots at Ao and Truth whom was dragged out from the light pillar earlier, allowing the Quartz's influence to be undone on them. She and Elena reunites with Ao. 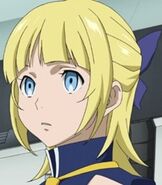 Fleur in her fighting suit.
Add a photo to this gallery

Elena and Fleur on their TV series

Time leaping Ao shows everywhere
Add a photo to this gallery
Retrieved from "https://eurekaseven.fandom.com/wiki/Fleur_Blanc?oldid=14516"
Community content is available under CC-BY-SA unless otherwise noted.