Start a Wiki
This article is a stub. You can help the Eureka Seven Wiki by expanding it.

The KLF (Kraft Light Fighter) Mon-Soono is the standard combat Light Finding Operation used by the United Federation Force which makes it the most mass-produced LFO archetype on the planet. It's production began sometime during Eureka Seven vol.1: The New Wave, and did not see full deployment until the start of Eureka Seven vol.2: The New Vision, or, shortly before the start of the anime series. The versatility of the weapon configuration makes it a well rounded craft for both general combat and reconnaissance use.

In Eureka Seven: AO, two Mon-Soono's made a cameo appearance alongside Nirvash typeTheEND after Generation Bleu's headquarters were destroyed from the rising Quartz. They appear to be destroyed once Truth rises with the Kanon IFO. 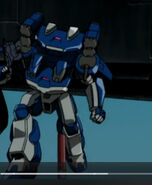 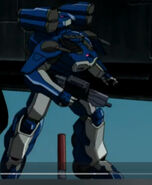 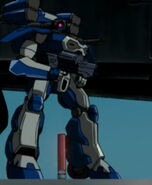 Retrieved from "https://eurekaseven.fandom.com/wiki/Mon-soono?oldid=13009"
Community content is available under CC-BY-SA unless otherwise noted.