The Nirvash type Zero is the oldest known L.F.O. on the planet, and is featured in Eureka Seven. At first, it could only be piloted by Eureka, a Humanoid Coralian, but later on it accepted Renton Thurston. In Eureka Seven Vol.1: The New Wave, Sumner Sturgeon pilots the Nirvash to defeat Captain Sawyer and find Ruri near the end of the game.

This is the original form of the Nirvash type ZERO. The Spec 1 has two modes: Robot mode and Vehicle mode. Robot Mode, whose means of transportation is the giant ref board made by Axel Thurston. With the giant ref board, the Nirvash is able to fly and fight while in the air. It also has the capability to transform into a Vehicular mode for its second form. The Spec 1 was the very first LFO ever made and is regarded as a formidable foe on the battlefield.

The Spec 1 has also been featured in the game Eureka Seven Vol. 1: The New Vision. A girl named Ruri is tasked with securing the Spec 1 and bringing it to Gekkostate. Later on, Sumner Sturgeon pilots it in an effort to rescue Ruri and defeat his teammates after he defects from the military. It is unknown as to why the Spec 1 allowed Sumner to pilot it but it is possible it allowed him to do so to bring it back to it's original pilot, Eureka. 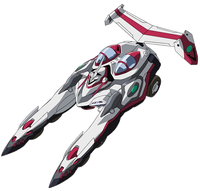 In LFO mode, the Nirvash's body color is primarily white, having light brown spots in some places like it's joints, and red lining. It's soles are black, blending to grey, the white as it goes up. It has red diamond patterns on each foot, and a wheel behind it, used later for land mode. It's legs are white in front, and black in the back, with grey kneecaps. It's chest, and pelvis are separated by its yellow stomach in the middle. It's chest has two glass car lights, it's arms has a small, shield on its shoulders that has a little green circle in the middle. The giant mass on it's back is where the drivers sit. The Nirvash's has green eyes, with thin long horns, and a white scalp.

When Renton returned after running away and reunited with Eureka, the Type ZERO's archetype underwent evolution and its outer armor had to be redesigned. Dr. Bear, of the Tresor Laboratories, was instrumental in the redesign and it was his ideas that lead to the Type ZERO's additional aircraft mode to go with it's alternate car mode.

The Nirvash Type ZERO Spec 2 has also made an appearance in Eureka Seven: AO. It was piloted by Eureka (then six months pregnant with her and Renton's first child, Amber) when she first arrived in the past. Soon after she returned to her world, the Spec 2 stays behind to confront Truth, who then gives it to Naru after defeating it. Later on, Truth damaged it when Naru tried to help him, thinking that he is infected by the Scub Coral like she is, and the Nirvash ended up losing an arm. Not long after that, Ao (son of Renton and Eureka) rescued the Nirvash and Naru after he avoided the tracking lasers that Naru fired at him and destroyed it's ref board. It is unknown if the tracking lasers were part of the initial design of the Spec 2 in the original series by the Tresor labs, or if it was later added on by Renton, or even added on by Truth and the Scubs before giving it to Naru, as this weapon was not shown to be equipped on the Nirvash in the original series. It is unexplained what happened to the Spec 2 after Ao takes it out with the Neo.

The Spec 2 has also made an apperance in the movie, Eureka Seven: Pocketful of Rainbows.

This is the final form of the Nirvash that is seen in Eureka Seven. In the final episode, when Renton called out to Nirvash to help him get Eureka back it responded by transforming into this version. Its left eye is blue like Renton's and when Eureka is saved, its right eye opens and is revealed to be pink like Eureka's. By having Renton's and Eureka's emotions engraved into its Compac Drive, it achieves the ability to reach enlightenment and departs for another universe along with half of the Scub Coral and the humans inside of them. Despite being referred to as "he" by Eureka, the Nirvash speaks with a feminine voice in this form. Given previous hints in the show, this might also confirm Nirvash to have a feminine gender.

The final form of Nirvash that is exclusive to the movie, Eureka Seven: Pocketful of Rainbows. It was created after Renton heard Dominic's last words. It is capable of fighting Images and the Devilfish while flying with its high-speed booster. It also has enough power to destroy the Image Core, and enough speed to catch up to the Hammer of God beam.

The Larval form of the Nirvash type ZERO in Eureka Seven: Good Night, Sleep Tight, Young Lovers. This is the form Nirvash takes in this world as Archetypes "grow up" from these Larval forms.

The ultimate form of Nirvash, as shown in Eureka Seven AO. It draws characteristics from both the Spec 3 and V, having a frame and weapons like the Spec V, but being shaped to look more like the Spec 3 and having its green and white color scheme and pilot pod. Like the Spec V it carries a staff strong enough to cut a lifting board and also has 8 floating options for mid to long range combat, possessing enough power to destroy a large Scub Plant instantly. When the floating options are not in use, they stack on top of the staff, making it longer. The Spec-V3 is also the true wielder of the Quartz Gun, the same weapon that Ao uses while piloting the Nirvash Neo.

The Spec-V3 is first seen at the end of Eureka Seven AO episode 22 to take Renton to the past. It later arrives in Ao's time period  during the second half of Episode 23 and immediately destroys a large Scub Plant. It then briefly engages and immobilizes the Nirvash Neo so Renton can lift onto it. Renton then takes it to Okinawa with the Nirvash Neo where after a short period of time, Renton takes the Quartz Gun from the Neo. The two then fight over possession of the Quartz Gun, and ends up following the Nirvash Neo and the gun ten years earlier in time. The Spec-V3 is last seen taking Eureka and Renton back to their universe and their time period (as shown by the moon carved with Eureka's and Renton's names) when Ao used the Quartz Gun one last time to destroy Secrets once and for all in his universe.

This form is revealed to be the type ZERO's form during the The First Summer of Love in Eureka Seven: Hi-Evolution.

In Eureka Seven episode 50, the Nirvash Spec-2 evolved into the Spec-3 form when it reacted to Renton's strong desire to save Eureka from becoming the Scub Command Cluster. It saved the two by becoming the Command Cluster instead and took half of the Scub Coral to an alternate universe (revealed to be the world Renton and Eureka's son, Ao, ends up being raised in), disappearing in a bright light. However, in Eureka Seven: AO, Nirvash is in Spec-2 form and being piloted by Eureka in episodes 12-14.

In episodes 22-24, Nirvash appears again, but this time in Spec-V3 and is piloted by Renton, even though it was still in the Spec-2 form and remained in Ao's world after sending Eureka back to her world in episode 14. The reason for its' reappearance and different forms remains unexplained. Also, Nirvash Spec-2 accepts Naru as its new pilot, despite the fact that Nirvash can be piloted only by Renton and Eureka, and even rejected Eureka if Renton wasn't in the cockpit. This also raises questions because at the time Naru received Nirvash, she was at odds against Ao over the Scub Coral, despite the fact that Ao is Renton and Eureka's son and is the child that the Nirvash Spec-3 had specifically asked them to give birth to in order to bring the humans and Scub Coral together as one.

When the mental states of the typeZero's pilots are in sync with one another, the Nirvash senses it through the Amita Drive and thus Compac Drive, resulting in a massive generation and/or amplification of trapar power, a bright column of pinkish light, radiating trapar rings of rainbow colors, and many various effects. 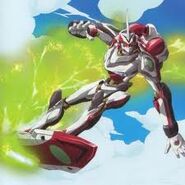 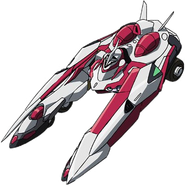 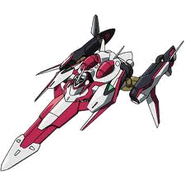 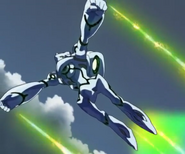 Spec 3 about to fire its Cannon.

Spec 3 before it bids farewell to Renton and Eureka.

Spec V hovering in the air. 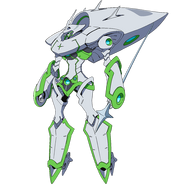 Retrieved from "https://eurekaseven.fandom.com/wiki/Nirvash_type_ZERO?oldid=13825"
Community content is available under CC-BY-SA unless otherwise noted.